Hands down, the most popular question I get asked about soap is related to natural skin lightening.

My answer is usually no. The essence of what I do is to create soap and other body products that are free of unnecessary chemicals. Even the fragrance oils I use pass strict standards and I can provide their MSDS.

However, some customers have reported that since they switched to using real soap, they have noticed their skin getting lighter and more glowy (I don’t even know what that really means 😀 ) to the point that people they live and work with notice. Co/incidentally these soaps have milk and or yogurt included.

I’m not a dermatologist but from my research, I can conclude that using products that nourish skin and are not chemical laden DO help the skin to regenerate and reverses the effects of sun exposure, which automatically leaves you one or two shades lighter than before!

Of course you need to follow up with a moisturiser with sun protection and stay out of the sun (10am to 4pm) as much as you can to prevent further sun damage to your skin. Soap is a wash off product but it sets a good foundation for what you put on it.

So based purely on anecdotal evidence and customer reviews, it appears I DO make all-natural skin lightening soap 😉

Long before I ever sold a bar of soap, I made many many batches to test for how oils available to me locally behaved in soap, how climate affected curing, and I also tried keeping soap away for a length of time to see if it was true that old soap was like old wine.

My experience has been interesting. A short while after I started making soap, I had to move house and I packed up a lot of soap in a box that was kept in a store room and I literally cried when I opened the box a couple of months later. While some of the soap looked like they had mould growing on them, rats had also found a way into the box and earned themselves serious tummy ache guaging by what was left behind in the box. I cried, people. Then I asked the gateman to throw the box far far far away (aka the big dustbin outside the gate).

After that episode I paid better attention to storing the soaps and that episode has never been repeated. I’ve been going back into my stash of old soaps and rediscovering the thrill of using extremely mild old soap.

The one I’m currently enjoying is the papaya salt bar I made over a year ago.

While the added fragrance has faded, the soap itself is a delight. At first the lather was a little sluggish because of the 20% coconut oil that was not turned into soap floating about in the bar. But after running some water over it and giving it a rub, the lush lather came bounding back. 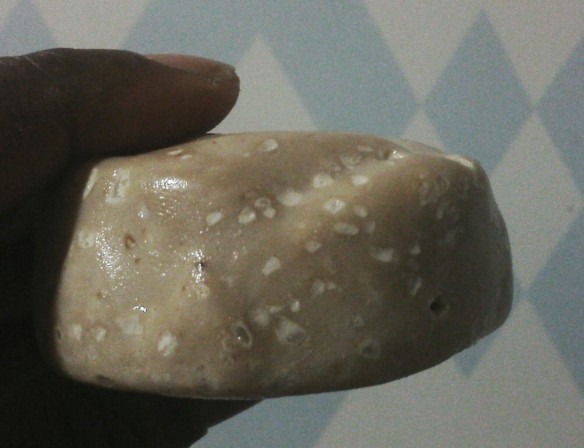 Its been in the bathroom ever since and I only just remembered to take pictures of it 😀 before its all gone. I’m not sure I’ve drank really old wine but I can imagine its the same experience 😉 .

I feel privileged to be able to find an outlet for my creativity through soapmaking at its the old soaps that thrill me because it reinforces how far I’ve come on this journey. And I’m thankful for the opportunity to pass on this passion to others and seeing what they are doing with the skills they’ve learned!

What do you get when you mash up a couple of 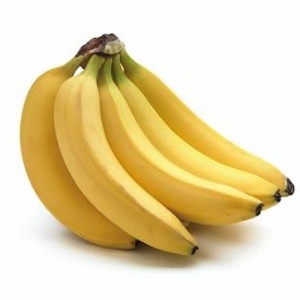 in a couple of spoons of

You have half the ‘liquid’ portion of my recent salt spa soap. I moulded half the batch in my regular cylinder mould then I added kosher coarse ground sea salt to the remainder

for the first time and moulded in individual cavity moulds.

Also had some good Palm Kernel Oil on hand and made this 100%. While the properties of PKO are similar to Coconut Oil in soap, this oil makes fluffy dense lather.

i was also surprised that my skin did not feel tight at all (even Castile makes my facial skin tight if I don’t moisturise). Also, I feel my skin looked brighter and DH agrees. This may be due to the yogurt and banana. I’m going to continue using this exclusively for a couple of weeks. I’m also calling the supplier for an additional 10kg!

Earlier on in my soap making journey, a dear friend told me to stop making her green soap because it reminded her of Key Soap {a locally produced soap meant for laundry. This is not a compliment!}. Since then every time I pick up colour I’m reminded of that comment.

For about a week or so I’ve had a colour in mind. It persisted so I decided see what I could do since I didn’t have that particular colour on hand. 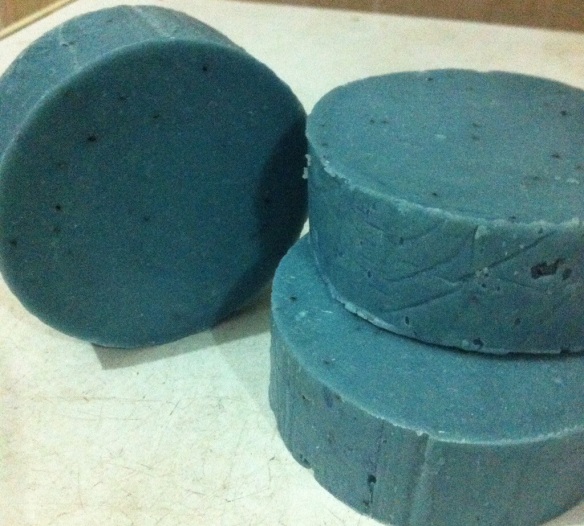 This aqua-ish colour was made from 2 parts mint green, one part navy blue and two parts titanium dioxide. I think the unrefined Shea butter also added a shade to this. The little dots are poppy seeds, just because 😀

The picture is a little darker than the real colour, and I really like how it’s turned out and I’m looking forward to trying out more combinations with the colours I have on hand.

Coffee with milk. Oatmeal with a generous drizzle of honey. A slice of succulent red grapefruit on the side. Of course I’m talking about soap 😀 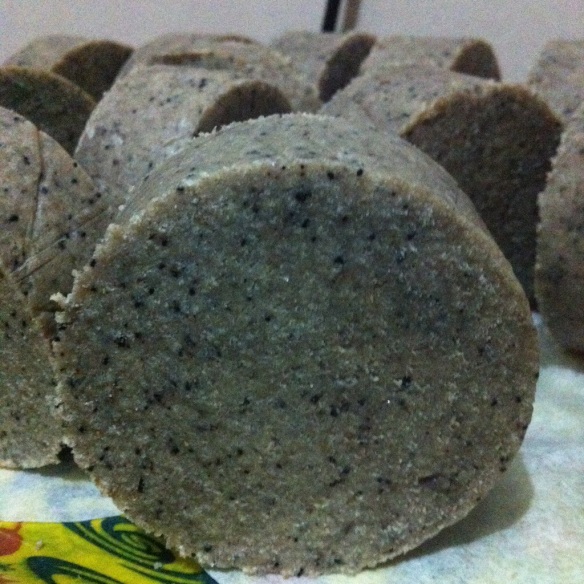 I took a sniff of a sample Cafe Latte fragrance in my stash and I just had to make this breakfast inspired salt bar as my next ‘creation’. I like how it all came together and it’s my first double batch salt bars because timing is VERY important when making these.

This scrubby salt bar has ground coffee beans in it for deep exfoliation {ain’t I sounding high brow cosmetics-y all of a sudden 😀 } so I would use it like 3ce a week or every other day. Coffee is also said to help boost blood circulation under the skin and is a popular ingredient in anti-cellulite products.

Salt naturally stings cuts in the skin so I wouldn’t advice this near any kind of broken skin. Clogged pores would thank it though.

Early on in my soapmaking journey, a friend I’d gifted some soap complained that one of the bars didn’t lather anymore. She said she really gave it a good workout 😀 but nothing happened.

At that time I chalked it down to hard water in her area and rested the matter. Recently…well over a year later… it registered in my mind as I was doing lathering tests what may have happened.

Handmade soap is usually made with a little (or a lot) of extra oils that’s not turned into soap. Not to mention all the natural glycerine that’s produced in the process. So for example my 100% coconut oil soap has 20% of ‘unsaponified’ oil in the bar. When I leave it unused for a few days, when I pick it up again it feels a little slick and I have to lather it under running water to get the luxurious dense lather that’s normal for that recipe! Other soaps with less oil lather up much quicker though.

Just thought to note this here for reference!

I was talking to a lady on Sunday who said she doesn’t buy salt scrubs because she ends up never using them. I totally understand her…I’m the same! Before I started making soap I bought tons of fancy products I ended up never using!

I had planned to make her a regular moisturising soap but decided to introduce her to salt bars instead, which I think is the best if both worlds. Then DH walked into the house with some juicy papaya…i couldn’t NOT incorporate it into the soap y’all.

In addition to bentonite clay {which turned the soap a dark peach initially}, I also added some dark honey and this is the final result 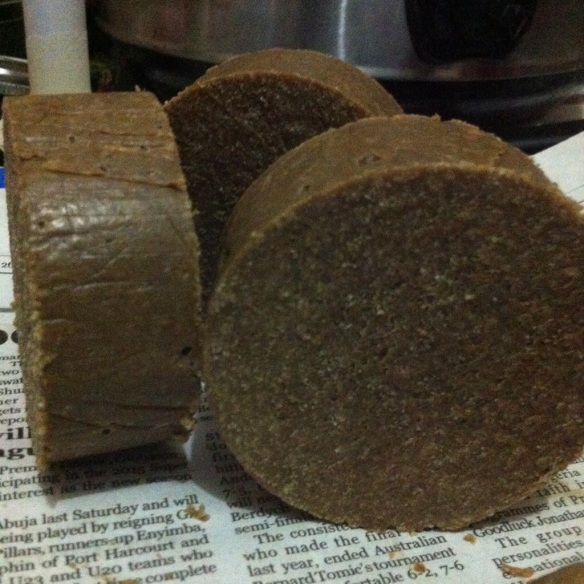 Fragranced with Vanilla {why didn’t I use this fragrance sooner???!!! I will be needing a big bottle of this fragrance ASAP} it’s downright yummy! I have no doubt she will be pleased.